Chef, Jack Higgott with his prize

Jack Higgott, a 19-year-old chef living and working at Cooinda Lodge at Kakadu couldn’t believe his eyes when he reeled in a Barramundi fish that came tagged with a $10,000 prize reward.
Just over a month into season three of the Million Dollar Fish competition, which runs up to February 2018, ten lucky anglers have now matched season one which held the record for ten $10,000 fish reeled in.
“I’d had a long day and thought I’d go for a quick fish to relax, so was pretty excited to spot the tag,” said Jack Higgott.
“I normally throw all my fish back, and spotted the tag just in time. I was only out for about 45 minutes and it was the only fish I caught.
“It was probably one of the best days I’ve ever had. Winning $10,000 is just not something you expect when you go out for a fish.
“The best part about living out here at Kakadu is being able to go fishing pretty much every day, so I’m going to use the money to fix my boat and hopefully catch the Million Dollar Barra. I think I’ll also get my sister something nice for her 21st.
The fish didn’t go to waste, with Jack making the most of his culinary skills and turning it into a crispy skinned barra with mango and mint salad.

“It’s the perfect dish for the tropics, particularly at this time of year with so many mangoes around.”
Department of Tourism and Culture CEO Alastair Shields congratulated Jack on being the 10th fisho to hook a prize-tagged fish.
“I encourage all anglers and their families to come to the Territory, try their luck at catching the Million Dollar Fish and enjoy our unique tourism experiences while they’re here,” Mr Shields said.
The Million Dollar Fish competition is a great initiative that has helped boost the NT’s reputation as a brilliant place to stay, play and fish and lure more visitors to the Territory during the wet season from October to February.
In Season 3 of the competition, 101 Barramundi have been tagged and released across the Territory with 100 carrying $10,000 cash prize tags. That means there are still 90 $10,000 Barras lurking and the prized Million Dollar Fish to be caught, plus a haul of prizes to be won just by registering for the competition.
The Million Dollar Fish competition attracts approximately 40,000 interstate visitors to the Top End for fishing each year, as well as an additional 40,000 Territorians who travel to fish across the year.
Cooinda Lodge & Yellow Water Cruises’ General Manager, Brett Skinner, who is a very keen angler himself, said that the wonderful thing about fishing for Barramundi is that irrespective of whether the ‘barra’ is tagged or not, the Barra provides million dollar eating.
“You taste the Territory when you catch and eat a freshly-cooked Barra – there is no other fish like it in the world,” said Brett.
“Fishing is great all year round in Kakadu, but during the wet season, fishing is incredibly abundant in waterways such as Yellow Water Billabong, though anglers need to be quick to catch them before the crocs!”
Season 3 of the Million Dollar Fish competition runs until the end of February 2018 and participants must register online at www.milliondollarfish.com.au for their chance to win a prized barra or one of the sponsors’ prizes.
Special accommodation packages, offering 20% off stays for two nights or more at Cooinda Lodge, are available throughout the wet season till 28 February. 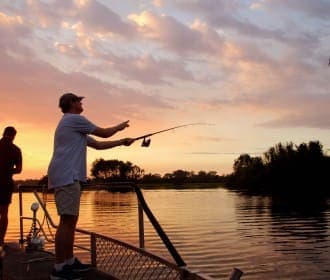